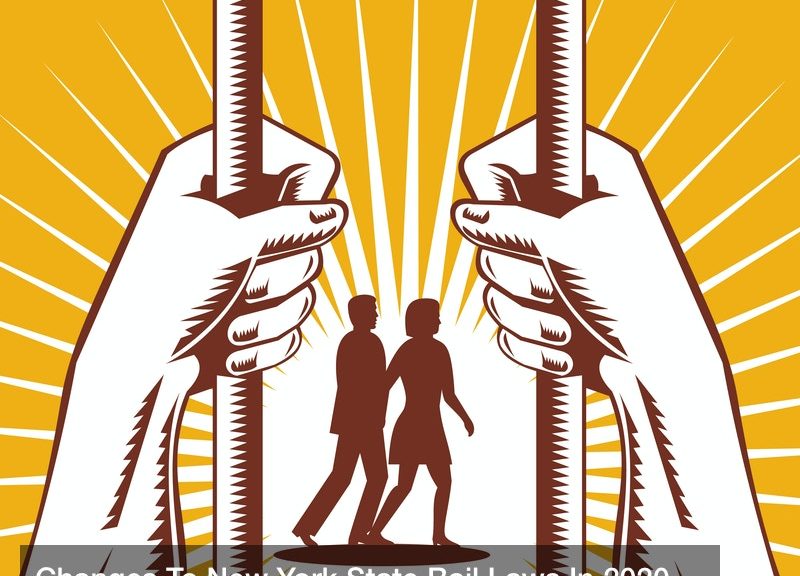 The new laws regarding bail reform in New York instituted late January 2020 were amended a short three months later in April 2020. The original purpose of the bail reform in New York was to reduce the number of people sitting in jail waiting for trial because they couldn’t pay their bail. This also supports the eighth amendment, which provides criminal defendants with the right to reasonable bail and to not be subjected to cruel and unusual punishment.

The original bail reform laws were overhauled in April 2019. Some public officials wanted the law to completely eliminate cash bail (a deposit refundable if the defendant attends their court date) entirely. The language surrounding this in the final draft was different but reached its intended effect. Since it has been in effect, jail populations have gone down across the state of New York.

It was estimated originally that the new bail laws would have reduced the jail population by at least 40 percent. However, the bail reform in New York was heavily criticized before and after it went into effect because many claimed it would contribute to an increase in crime. Many well-known lawyers and public officials called for revisions.

Many parties, including federal criminal defense and Mayor Bill de Blasio, along with other groups, were concerned that this law would allow dangerous criminals freedom to walk the streets and commit more crimes. There appeared to be a rise in the crime rate following the new laws, though that data for that has been disputed. This is where the amendments in April came to place. The basics of the January edition were not changed. The amendment added more situations where judges can impose cash bail. Judges will also have more discretion in setting bail and conditions of pretrial release.

One of the biggest changes that came about from the bail reform in New York was an addition of 15 bail-eligible categories where Judges can now set bail or send the defendant straight to jail.

Judges also have the ability, under the revisions to the bail reform in New York, to set a cash bail based on the defendant’s legal history and status, rather than simply the crime committed. They currently can only set bail, however, based on their likelihood to attend court appearances, not on their likelihood to commit more crimes. This, along with the previous list, increases the number of cases where bail can be used.

For example, if a defendant is on probation or eligible to be sentenced as a “persistent felony offender” (one of the new categories in the bail reform), the judge can set a cash bail with every new felony charge, even if those new crimes don’t fall under the eligible list of crimes that qualify for cash bail. If an injury attorney is working in the case, either with the defendant or the plaintiff, they can talk with the judge about the information that could impact the decision of bail.

More Options For Judges To Ensure Defendant’s Appearance In Court

Though the new laws for bail reform in New York allow the use of cash bail for more types of cases, it doesn’t necessarily mean that judges are required to use it. Judges now have a new variety of conditions to use when releasing a defendant prior to trial to ensure that they come back for their assigned court date.

Previously, judges could order options such as pretrial supervision or travel restrictions to keep tabs on defendants while they waited for trial. With the updates, judges can now require people to surrender their passports to keep them from traveling, cut off contact with witnesses and victims, or participate in mental health treatment as a stipulation of their pretrial release. Judges can also order different types of bail bonds to use as collateral if the person fails to show for court. There is even a type of bond where a family member or friend has to guarantee that the defendant will show for court. These are just a few examples of the alternatives to cash bails judges now have the discretion to use.

Part of the new laws for bail reform in New York requires more rigorous data collection by court administrators. They’re now required to track data regarding people charged with crimes and what happens during the pretrial phase of the case. They are also required to track how many people are released and under what conditions, how many get pretrial custody, the number of people that fail to attend the trial, or are rearrested.

If this data collection process is done well, the information that comes from it will be able to track how successful the bail reform laws are and whether it’s working as it should. It will also be able to shine a light on any unfair treatment to certain demographic groups.

However, the new law did not allocate funding for these new requirements, so it’s unsure how successful they will be, or if they will happen at all.

Forms of Bail In New York

New York state has nine forms of authorized bail which are:

If a judge sets bail, they must select at least three of the nine previously mentioned forms of bail. The two most common are cash bail and an insurance company bail bond. They may also set different amounts based on the form of bail.

The basics of the bail bonds process in New York is similar to every other state aside from a few differences that make a difference for those working with a bail bond company in the state.

For bail reform in New York, it is the responsibility of a friend or family member to contact a reliable bail bonds company once the judge has set bail. The attorney the family is working with can give recommendations for bail companies they have trusted in the past. While anyone can payout the total for bail, only a licensed bondsman can post a bail bond. When signing for a bail bond the co-signer is guaranteeing that the defendant will be present at all their court appearances, and if not the co-signer will payout the total of the bond.

Simply put, if the defendant attends all court appearances, the co-signer will not have to pay any money. If any court appearances are missed, the bail total will be forfeited, meaning the bond company has to pay the court and the co-signer must pay the bondsman. There are quite a few different bond companies in New York, even some companies that offer 24 hours bail services.

Most bail agents for bail companies work with misdemeanor cases where the bail is set to $10,000 or less. The new laws regarding bail reform in New York have also impacted the number of felony cases bail companies take as cash bail and bail, in general, has changed for specific types of crimes.

The upfront cost of jail bonds are generally considerably less than the face value of the bond. The cost can be split into two parts: the premium and collateral.

The premium, also known as a fee, is set by New York law and is usually 10% or less of the bond face value. The premium is never refunded. The collateral is not always required. This will be determined by the judge or bondsman based on the circumstances of the bond. However, collateral will be refunded as long as the defendant follows the requirements of the bail.

The Reaction to The New Bail Reform In New York

Both supporters and opposers of the reform do not seem to have much praise for the new laws. Supporters of bail reform seem to feel that the law does not go as far as it should. Senator Jessica Ramos stated the new law, “dramatically rolls back bail reform and will send more New Yorkers to jail at a time when we should reduce our jail population, not expand it.”

New York state looked as if they were going to make further changes to bail law as draft proposals were being considered that would have eliminated cash bail but granted judges the ability to consider “dangerousness” when deciding whether a defendant would go to jail. However, many argued that this would introduce more bias into the system, especially racial bias.

Clarise McCants, the criminal justice campaign director at Color of Change, a racial justice organization said, “Granting judges dangerousness would be the worst possible scenario. But rolling back reform at all during a time like this is really just unconscionable, given that any rollbacks to bail reform will mean more people being held pre-trial.” For now, dangerousness has been left out of the final bill.

Opposers to the changes are also concerned. The Police Benevolent Association, a union for NYPD officers tweeted, “This approach does not come close to addressing the problems w/ the law. What about serious offenses that didn’t make the cut? Bottom line: judges still don’t have the discretion to hold many dangerous criminals, regardless of their history, the facts of the case, or the threat they pose to the public. This only kicks the can down the road, while more New Yorkers will be unnecessarily victimized.”

However, there have been defendants who have voiced their appreciation for the changes. A 26-year-old man from the Bronx was jailed for charges of robbery, grand larceny, and assault. He could not pay the $5,000 cash bail, but as the law was to change in January, he was released in mid-December 2019. He said, “I got to come home December 20th and my daughter was born December 22. I mean, it was really beneficial to me and it was a great blessing and I look at it as it was inspiring for me to keep doing the right thing and not look back.”