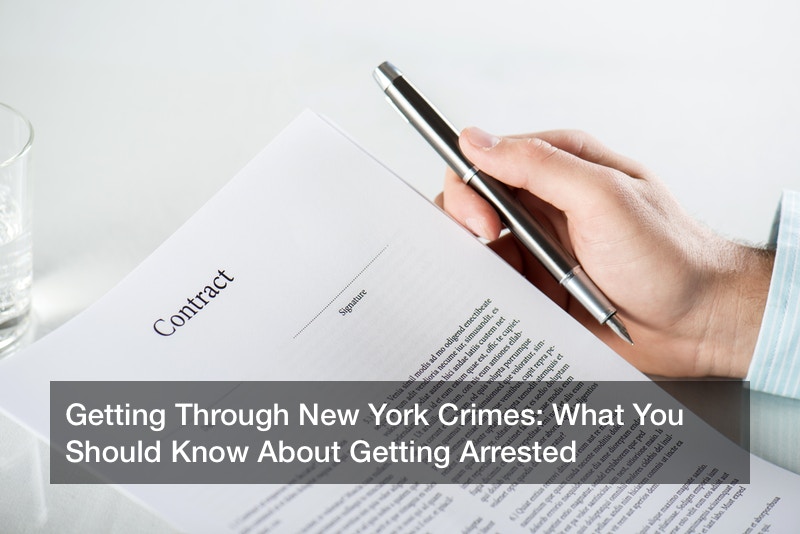 Being arrested for New York crimes can be disorienting, particularly if you are accused of something you did not do. Unfortunately, most New Yorkers are not aware of their rights or the procedure that will be used to handle their case. As a result, they make uninformed decisions that can alter the course of their entire life.

New York classifies offenses as felonies (the most serious), misdemeanors (less serious), and infractions (the least serious). Felonies, like a homicide, burglary, or arson charge, can carry a sentence of up to life in prison. Misdemeanors, like prostitution, vandalism, or a petty theft charge, carry a maximum sentence of one year in jail. A violation, such as a traffic citation or parking infraction, usually results in a fine, but can carry a maximum sentence of 15 days in jail.

However, being arrested carries some other, more serious consequences. For example, having an arrest record can prevent you from renting an apartment, obtaining a bank loan, or receiving a job offer. Moreover, if you are convicted of certain offenses, you might have to register as a sex offender, exposing you to further housing and job discrimination.

Here are some steps to take after being arrested for New York crimes to try to minimize the effect of the arrest on your life:

This point cannot be overemphasized. When you are arrested for New York crimes, call a lawyer immediately. Ask for a lawyer when you are questioned. If you are arrested without being questioned first, call a lawyer as soon as law enforcement starts asking questions. If you are booked before you are questioned, use your phone call to call a lawyer. If you do not have a lawyer’s phone number, ask for the phone number for the public defender so you can be represented until you can hire a lawyer.

If you do not call a lawyer when you are questioned or arrested, you could make an admission that could place you in more serious legal jeopardy than needed. Keep in mind that law enforcement is trained in interrogation techniques that some might view as unfair. While questioning you, law enforcement can put words in your mouth, pretend to sympathize, and even lie. Falling for these techniques can force you to defend yourself against your own words.

Be Honest With the Court

Once you have been booked and spend a night (or two) in jail, you will be arraigned. This is when you will be officially notified of the New York crimes you have been charged with. You may be asked to enter a plea as well.

New York has acted diligently in reducing the reliance on money bail to ensure criminal defendants appear at trial. Generally speaking, New York’s bail statute limits bail to New York crimes that are violent felonies. For New York crimes that are classified as violations, misdemeanors, and non-violent felonies, the judge is supposed to release the defendant without bail.

So, if you have been charged with a forgery — a non-violent felony in New York — you should be released without bail. Likewise, a charge of simple assault — a misdemeanor in New York — would also result in release without bail, even though the assault might have involved violence.

In cases where the charges include a violent felony, the judge is allowed to release you without bail or require you to post bail for your release. If the judge requires bail, the judge must explain the reason for imposing bail, but New York law does not set any standard for imposing bail other than it must be tailored to secure your court appearances.

New York law has two exceptions to this rule:

Bail is used to secure your appearance at trial. The theory works as follows:

In New York, judges are allowed to set differing amounts depending on whether the bail is posted as cash or bond. For example, a judge may order $2,500 cash or bond (meaning it is the same amount regardless of how it is paid) or $2,500 cash or $5,000 bond (meaning the bail amount is higher if it is paid with a bond rather than cash). Considering that the average rent in the U.S. is about $1,500 per month, you can expect to pay less than one month’s rent for a bond in most minor cases.

Shop Around for Bail

New York has many bail bondsmen. With so much competition, terms can vary. Moreover, you may find that some bondsmen are easier for you to work with than others. Keep in mind that if you require a bond, you will have to deal with the bondsman for the entire time you are waiting for trial. If you do not like your bondsman, you could be in for a very long and difficult wait for trial.

While some bail bondsmen prefer to work in their local area in case you fail to appear in court, you may be able to find a bondsman in a different county who is willing to write a bond for you. Shopping around in your county, as well as neighboring counties will help you find the best deal.

If you are released pending trial, observe all your release terms. Failing to abide by these terms could place you in a very bad position including:

Depending on your release conditions, a violation might be difficult. For example, you might be ordered not to be arrested again. As long as you stay out of trouble, this should be an easy condition to meet. Similarly, you might be placed on supervised release and required to check in with a pretrial services company periodically. Again, if you make your required appointments or phone calls, you should be able to meet this condition.

Most importantly, do not jump bail. Bail jumping occurs when you fail to appear in court as required for your case. Bail jumping could result in you being tracked down by a bounty hunter hired by your bail services company and dragged to jail. Unfortunately, bail jumping is one of the conditions that a judge can use to deny bail and holding you in jail. Rather than gaining freedom, bail jumping is likely to result in a long time in jail.

Get a Lawyer and Work on Your Defense

Often, the lawyer who represented you during your arraignment and bail hearing is not your permanent lawyer. For example, if you were booked into jail and were unable to hire a lawyer, you might have had a public defender when the judge determined you needed to post felony bail bonds for the New York crimes you were charged with.

However, some criminal defense lawyers have more experience and knowledge about certain crimes than other lawyers do. For example, a lawyer may focus the lawyer’s practice on financial crimes and work exclusively for business people. These lawyers might not be willing to take an assault case, but may be willing to take a forgery case.

Once you arrange your release with your bail bond company, you should begin working on your defense with your lawyer. Criminal cases have a number of hearings and your lawyer may also be able to negotiate a plea deal with the prosecutors. As a result, you will need to bring your lawyer up to speed as soon as possible.

Moreover, your defense may require evidence, such as phone records, witness statements, and physical evidence. Your defense lawyer will need time to acquire any evidence and have it analyzed.

If you are offered a plea deal, consider it carefully. Criminal trials can be unpredictable. Even if you think that you can persuade a jury that you are not guilty, there is always a risk that you will be found guilty and receive a more severe sentence than you might get under a deal.

Learn From the Experience

For the most part, people are not accused of New York crimes unless they were in the wrong place at the wrong time. It might be that you did not commit a crime. However, if you were associating with people who committed a crime or were doing something that could lead to a misunderstanding about a crime being committed, like doing drugs, you can certainly change your habits to avoid going through all the heartache of an arrest, jail, court hearings, bail bondsman companies, and lawyers.

Getting arrested is a traumatic experience and can have serious consequences. Rather than being dismissive of the risks or treating the situation lightly, you should take it very seriously. Be prepared to call a lawyer and post bail. While you are out on bail, make sure you observe your release terms and do not jump bail. Finally, work with your lawyer on your defense and consider your options carefully. You might not be able to skate free of the New York crimes you were accused of, but you might get an acceptable outcome.