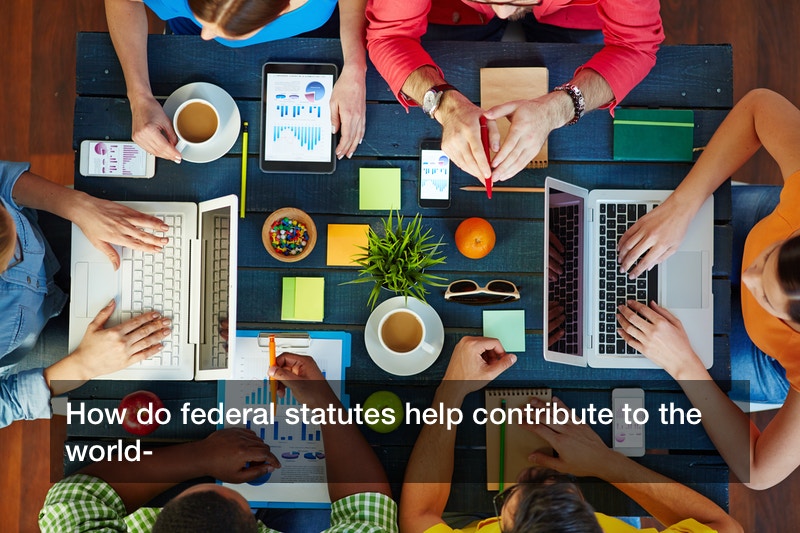 Laws are created to ensure the world is run smoothly. Wherever you live their are laws in place to protect you, keep things fair, and ensure the safety of the people on the planet. Laws are updated as they need to be through different court systems, congress meetings, and presidential decisions. How do federal laws and federal statutes make the world better and are there any that could use an update that you can think of? There have only been 27 constitutional amendments to date but there may always be room for improvement.

Think about all the different laws that you can and try to think of how they have benefited you in your lifetime. If a person steals or robs from someone they can be arrested and thrown into jail until they are seen by the courts and they will decide how they will be punished based on the crime committed and their previous history. But if the person in question has no evidence against them other than hearsay they may be released and not charged. The use of evidence to uphold charged has been used for decades and has been the best way to put a name to a crime. Evidence can be anything from a video tape of the crime in progress, fingerprints, and even witness statements. Laws have been shifting and changing to try and keep guilty people behind bars and keep criminals from terrorizing the neighbourhood. These state rules and federal statutes keep the peace and ensure public safety in the world.

The government makes the decisions on which laws should be passed and which laws be put aside. The President has ten days to either sign and instate the bill passed or veto the bill altogether. So what is legislative intent and how does it affect the court system and laws passed? Legislative intent is what the courts have decided to call their analysis of the documents from history originating from when the statute in question was under consideration within the Legislature whether it is state or federal. The evidence the courts used to help them to make these decisions came from the legislative documents that were prepared before, during and even right after the bill in question made its way through the legislative process. These federal statutes in place have been made to create peace and prosperous living spaces for all those who share this world.